It’s no easy feat to live up to expectations when everyone in the world of gaming is anticipating nothing short of perfection from your next game, before even catching a glimpse of it in action. These lofty expectations are surely attributed to Rockstar’s ability to continually redefine the open-world genre, release after release. With GTA V the wheel hasn’t exactly been reinvented, but it’s bigger, more refined, and a celebration of every installment that precedes it. This isn’t just the greatest game in the series, but arguably one of the best experiences of this generation.

Where previous entries planted you in the shoes of a single protagonist, GTA V allows you to switch between three characters, adding layers to the storytelling, and lending to a more dynamic presentation. Michael – the nucleus of the group – is stuck in a mid-life crisis of sorts, which is drawing him back to a life of crime. Franklin is a young go-getter from the hood who aspires for bigger things. And Trevor? Well, Trevor is a psychopathic meth dealer. Having the option to switch between these cosmically different characters, and focus on missions that reflect their individual lifestyles, freshens up the pacing; although occasionally at the expense of the story.

Gameplay remains largely the same as it ever has, relying mostly on driving and shooting. Tighter aiming and helpful auto-targeting smooth out gunplay (though the pin reticle is often lost in the action at times) and vehicles feel more responsive than ever. To make those overwhelming moments filled with torrential gunfire and precision driving more manageable, special character abilities have been added to the fold; these basically allow you to slow time during gameplay to focus your efforts. Don’t like the assistance? Don’t use it. We hardly indulged in these luxuries throughout the campaign and the challenge was never out-of-hand. Character skills (like speed, shooting, driving and so forth) can even be leveled up throughout the game with the more time you spend performing that respective action.

Missions generally revolve around driving from A to B to C, eliminating targets, clearing out buildings, and stealing vehicles, with a few shakeups and surprises along the way. There isn’t much new to the formula, but instead it’s the way that these agendas work into the story and introduce you to entertaining characters that make them more exciting and rewarding than ever. Even more impressive is how seamless the transition is when entering the area of a mission; gameplay continues to cinematic without a hint of loading. The marriage between gameplay and presentation is top notch, making for the most showy, and deep, GTA yet. 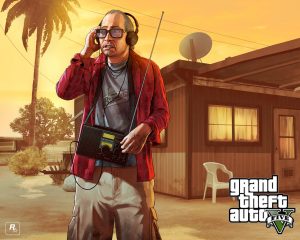 Throughout the campaign there are heists that need to be carefully orchestrated. Planning starts at the drawing board, where you’ll choose from two methods of approach (generally guns blazing, or something more subtle), and carefully piece together an appropriate team. From there you’ll have a series of preparatory planning missions all leading up to the big score. It’s a natural addition to the series, and by allowing the player to make decisions, it adds more investment in the outcome. Even if things don’t always play out as planned, these heists are generally exhilarating and hard to forget.

One of the downfalls regarding gameplay is the teensy margin for error allowed by some missions. Clipping the tiniest edge of a wall during a chase, taking a second to digest a command, or just making a casual mistake can often result in a failed mission. These frustrations can mostly be alleviated by forgiving checkpoints, though it’s hard to not at least get a little annoyed; especially when the cause is an open-world oddity. Furthermore, the controls are demanding with a lot of buttons/schemes to memorize, which may take a while to wholly grasp. So being a proficient criminal is going to take work, but be warned, there are plenty of innocuous activities to distract you from your goals – and we mean this in the best way.

You’ll find the map loaded with strangers to meet, random events, special missions, and recreational activities to partake in around every corner. You can skip most of this content if you like, but these are the pieces that bring GTA V to life, to really immerse you in the game world. From golfing to off-road racing, bounty hunting to tennis, there’s such a diverse offering of substantial excursions, you may often lose track of the mission at hand. These seemingly unimportant detours are what make you feel part of a real world, and not just playing another video game. Additionally, the liveliness of the characters, easygoing hobbies, and scenic marvels can help to balance out the violence, if it ever gets to be too much.

Whether traveling by land, air or sea, Los Santos and Blaine County are truly a sight to behold. Being impressed by the sheer size of the game, and its ability to look stunning around almost every turn, is something we didn’t expect to exist harmoniously on current-gen hardware. There’s nothing quite like flying a helicopter over mountains and right through a densely packed city without a single load screen. It’s not all perfect, though, as there are moments of disappearing textures, slow to load environmental décor, and the common case of shifting shadows. Luckily these occurrences almost never affected the gameplay and corrected themselves almost as soon as we could take notice. Rockstar pushes the limitations of the aged hardware, and it pays off about 97% of the time.

And what’s a Grand Theft Auto experience without a compelling soundtrack? With 17 radio stations and a gripping score that takes center stage during the tensest of moments, it’s almost guaranteed that you’ll never want to play with the volume down low. We can’t count the number of times we arrived at our destination yet remained in the vehicle to finish listening to the great song on the radio – just like real life! Then when those songs from the commercials and the trailers would come on (like “Sleepwalking” by The Chain Gang of 1974 and Stevie Wonder’s “Skeletons”), their association could make ordinary moments feel cinematic. Furthermore, the tongue-in-cheek chatter of the DJs, and the absurd commercials bursting with hilarious yet thought-provoking social commentary, is better than ever.

It was around the 37 hour mark that we finished up the main story, and even then our completion percentage sat at a 76%, with plenty left to do. What makes it all the better is that everything seems to have been developed with replayability in mind; missions have goals that factor in a score, races have online leaderboards, and hobbies beg to be mastered. Then there’s GTA Online – which hasn’t even launched yet – that appears to be an extremely robust multiplayer offering. It’s safe to say that for $60, GTA V is a steal and could potentially offer 60+ hours of entertainment.

When it’s all said and done, the gameplay is good, the story is intriguing, and the characters are entertaining, but it’s the adhesion between those things that make this package extra special. How many games allow you to partake in stock investing, only to find success by exterminating a rival companies CEO? Where else can you take your dog for a walk, play with and train him just because? You’ll even receive texts, emails, and phone calls on your in-game cell phone from all the crazy characters you meet along the way. It’s the littlest things that go the longest way, lending to one of the most staggering, immersive game worlds ever created.

If you can stomach the violence and vulgarities, and are of legal age, there is no reason you should miss out on GTA V. It’s not every day that a behemoth of this care and quality is released, and we reckon there won’t be another open-world release of this caliber for quite some time. There are issues that come to the forefront occasionally, and the core gameplay hasn’t exactly changed all that much, but it doesn’t do too much to detract from the overall enjoyment. This is the culmination of open-world practices we’ve seen during the course of this console generation, and despite its flaws, we’d still call it masterpiece.

The year is 2017, and the games console landscape is in turmoil. A new flood of games flooded the market, changing what was once a niche market into a mainstream one. With a new generation of consoles rapidly approaching, the competition between them has never been more heated, and every new game is something worth paying attention to, even if you have not been interested in the series in the past. As a result, like many others, I have been keen to see what Grand Theft Auto V has in store for me, and I am pleased to say that this is without a doubt one of the best titles of the year.

Outstanding, multilayered heists and other missions

Huge, gorgeous, varied open world packed with things to see and do

Trevor is an unforgettable character

James Bond 007: Everything or nothing, From Russia with Love, Nightfire, Quantum of Solace